A timeline of all Forest Heroes related news coverage.

Grist: Why are we still losing so much rainforest in Indonesia? A hypothesis

Mongabay: The year in rainforests: 2015

Mongabay: Bunge: if you clear peatlands, we won’t buy your palm oil

Eco-Business: ‘She’s Not a Fan’ campaign scores a win for Indonesia’s forests

Grist: Remember that bulldozed rainforest? We have pretty good news!

The Independent: Jardine Matheson subsidiary accused of threatening at-risk species by cutting down swathes of rainforest for palm oil plantations

Grist: 48 hours that changed the future of rainforests

ClimateWire: How a small band of activists saved tropical forests by turning around ‘Big Doughnut’

Sustainable Brands: How Mars, Wilmar Are Making Good on Their Zero-Deforestation Commitments

Grist: Change 100 businesses, and the world’s food system will change with them

Mongabay: 2014: The Year in Rainforests 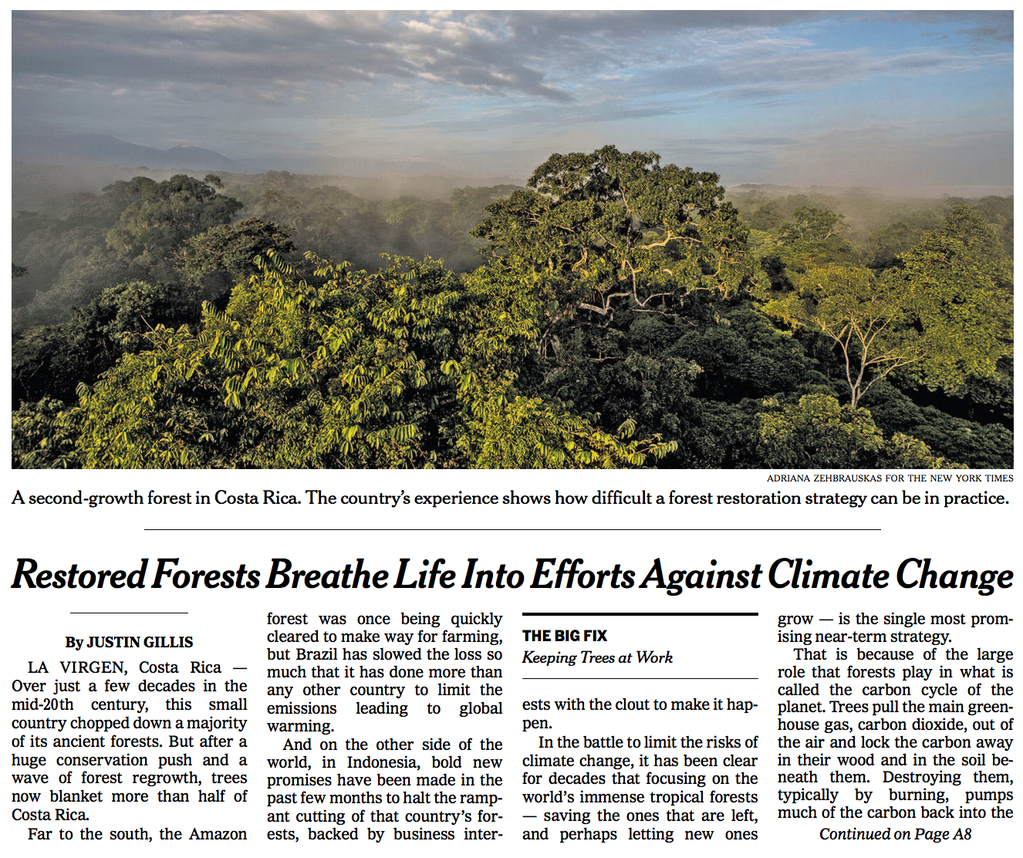 Grist: 2014 was stuffed with good food news that you never heard about

Eco-Business: The top 10 headlines that shaped 2014

Eco-Watch: 10 Most Important Environmental Stories of 2014

Eco-Business: The top 5 food and agriculture stories in 2014

Grist: How regular people are fixing the international palm-oil industry

Sustainable Brands: Future 500 Presents: The Best of the Best in Stakeholder Engagement in 2014

MongaBay: Cargill to use drones to monitor zero deforestation commitment

Huffington Post: It’s Been a Spook-tacular Year for Rainforests

MongaBay: No forests, no cash’: palm oil giants commit to sustainability, but will they follow through? 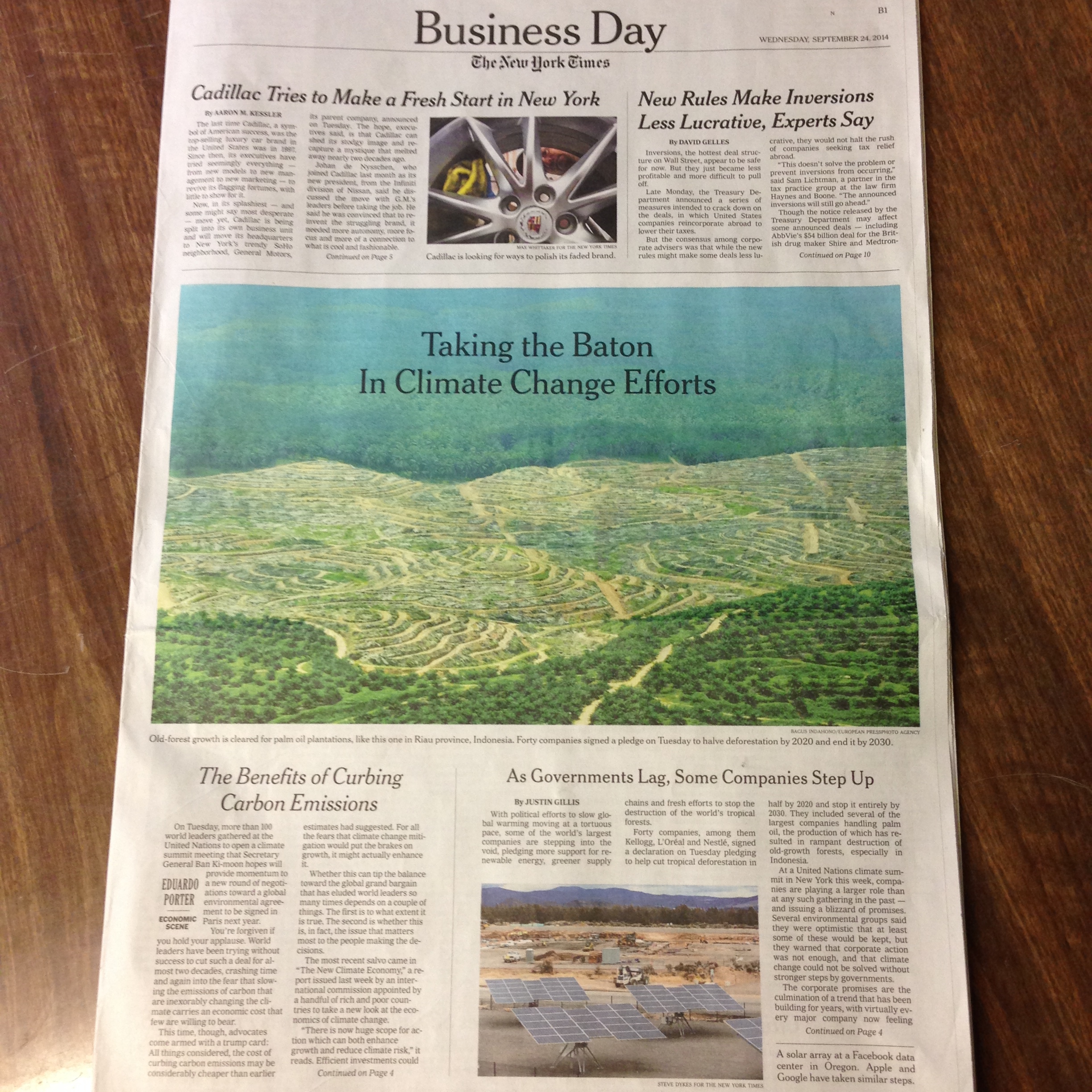 BBC: Cargill in deforestation pledge as part of UN summit

Grist: Cargill promises to stop chopping down rainforests. This is huge.

Grist: Cargill promises to get right by palm oil

Philadelphia Inquirer: “Now who would picket the opening of a Krispy Kreme?”

Vice: We Talked to Dunkin’ Donuts About Palm Oil on National Doughnut Day 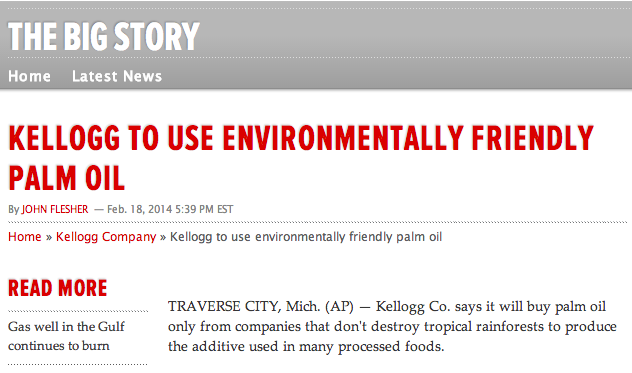 A small sample of the AP pickups:

The Associated Press also put out this brief, which was published in many print editions of newspapers, including the New York Times.

And here are the rest of the media hits: 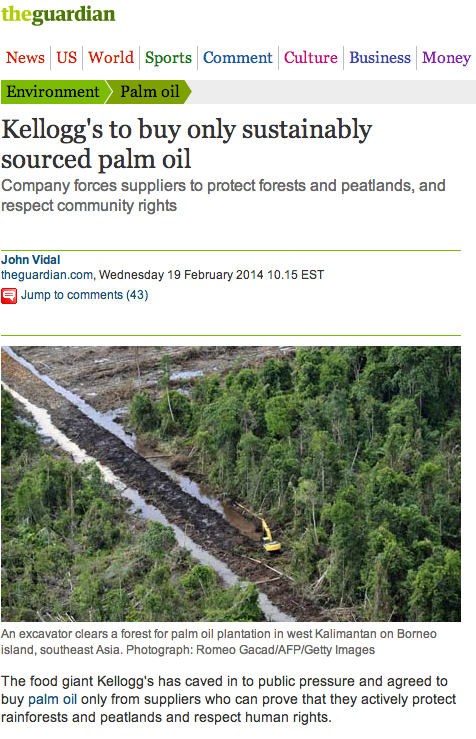 The Guardian: Kellogg’s to buy only sustainably sourced palm oil

MongaBay: In Girl Scouts vs. Kellogg’s over palm oil, rainforests and orangutans win

One Green Planet: Kellogg to Begin Sourcing Only ‘Sustainable’ Palm Oil in 2016

Energy Live News: Kellogg’s to only use gr-r-r-eat palm oil in cereals

WBUR: How Tracing The Oil In Your Pop-Tarts May Help Save Rain Forests

NPR-The Salt blog: How Tracing The Oil In Your Pop-Tarts May Help Save Rain Forests 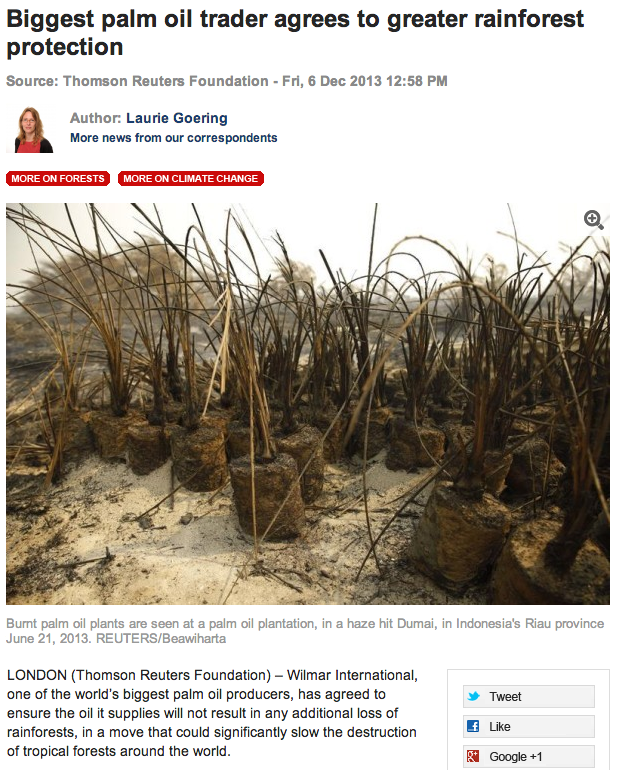 ClimateWire: Palm oil giant agrees to halt forest destruction and that of its suppliers 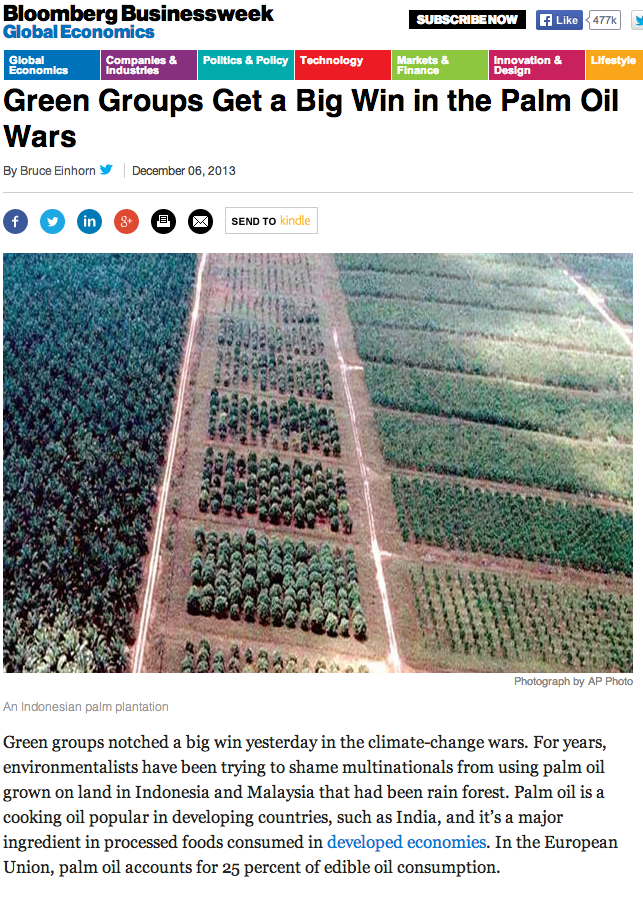 TIME: Kellogg’s Isn’t Being That ‘GREEEAAAT’ To Real Tigers and People Are Angry 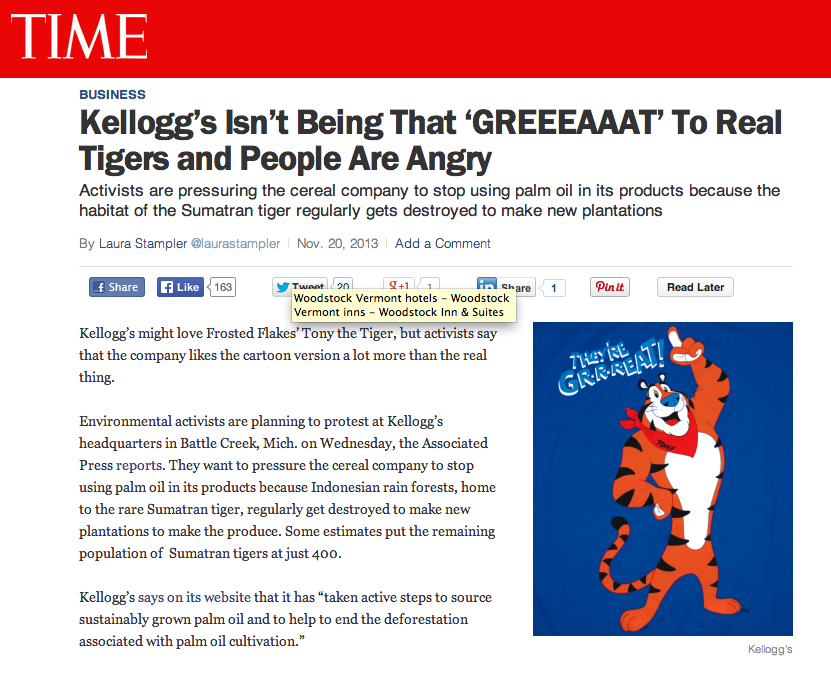 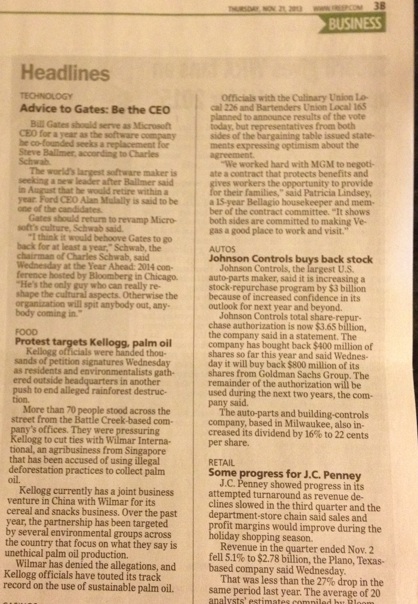 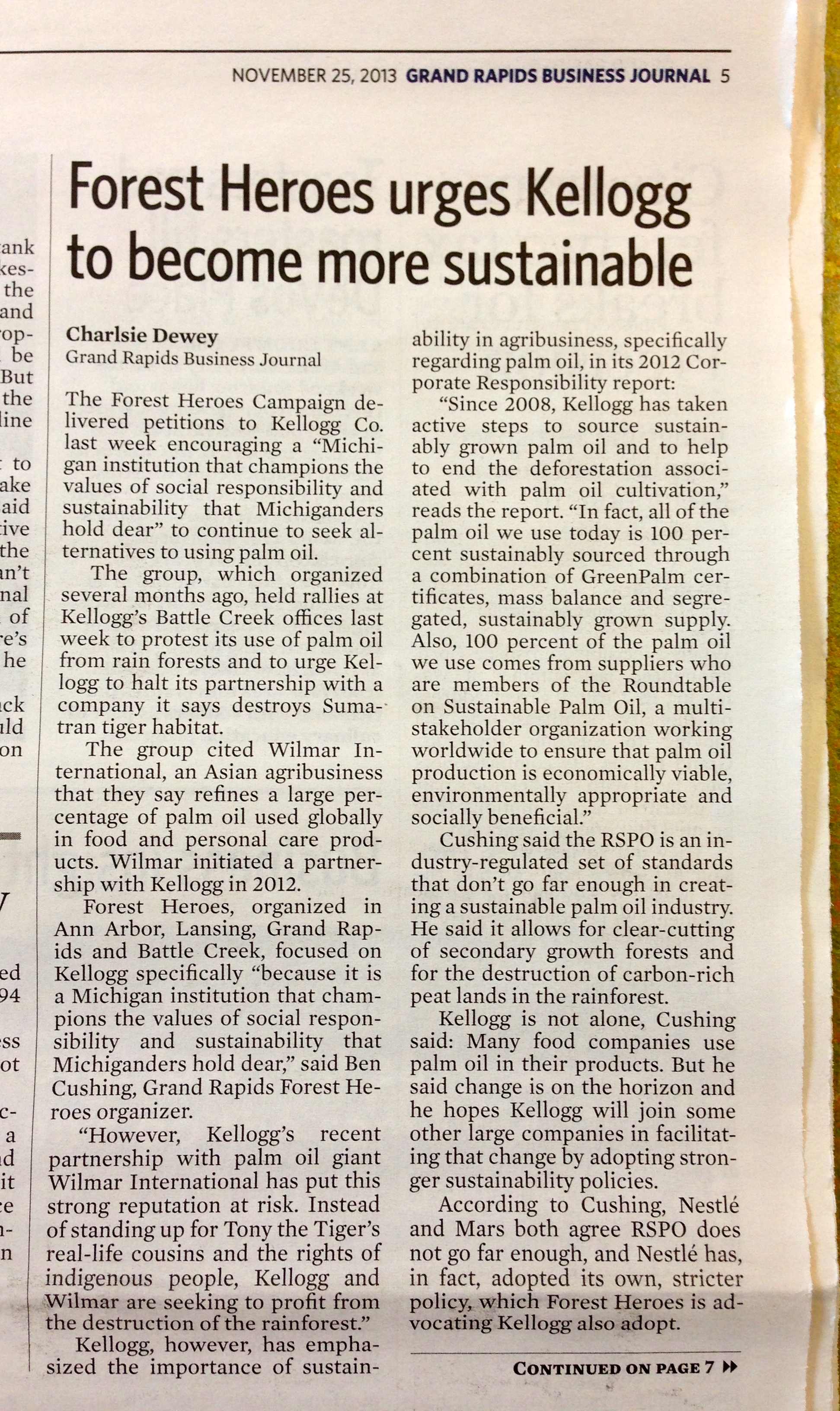 Battle Creek Enquirer:  Letter: Kellogg’s legacy should not be deforestation 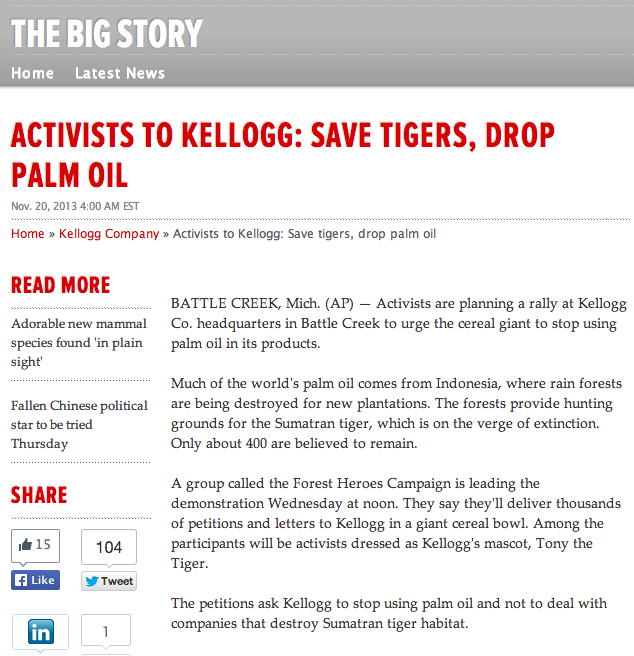 An Associated Press story before the event was picked up just about everywhere:

And then a great follow-up in the Associated Press got into even more details about the event. 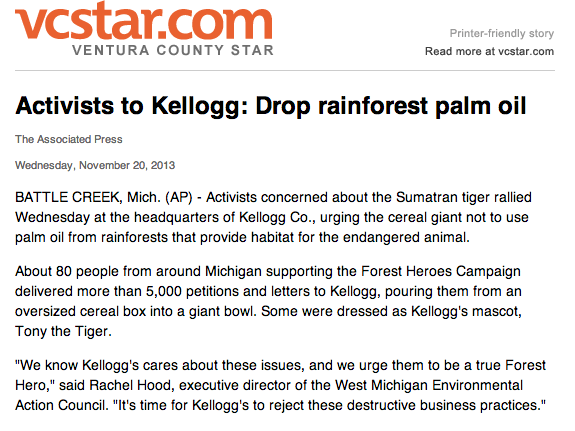 WILX News 10 : Anti-Kelloggs Call to Action: Local station ran a piece about the call-in action on the evening news. Here are some shots of the coverage. 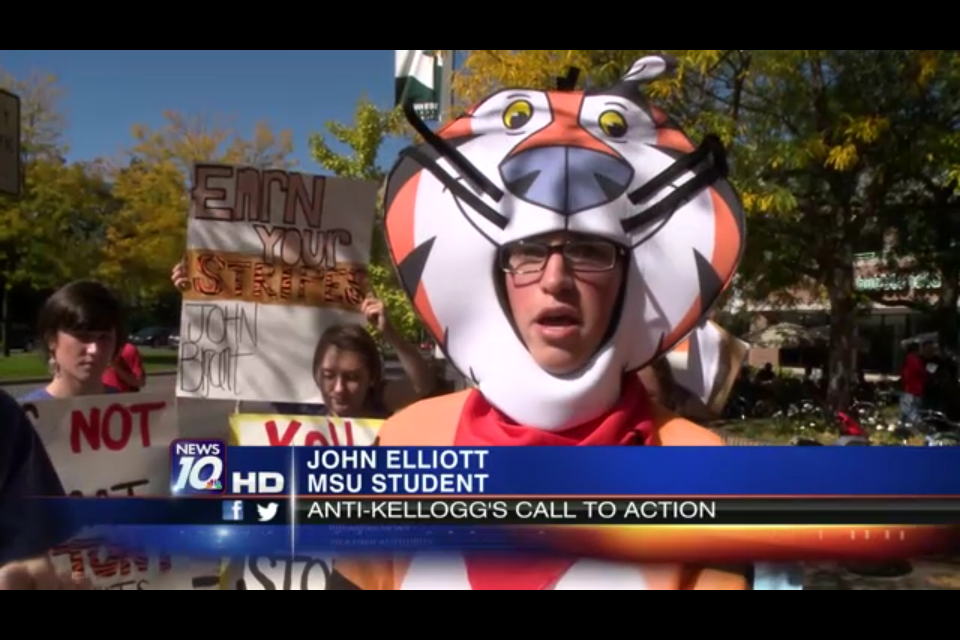 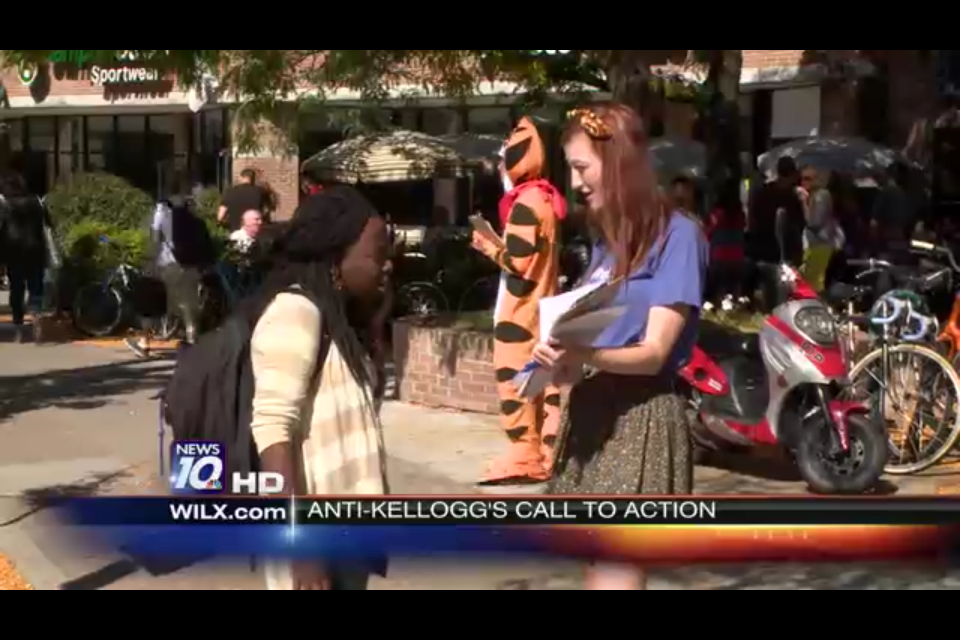 MLive: The website of eight regional papers in Michigan covered the Battle Creek and Grand Rapid actions with an article and a slideshow.

The Washtenaw Voice: The paper of the local community college in Ann Arbor ran an article under the headline: “Can Kellogg’s Tony help save other tigers?” 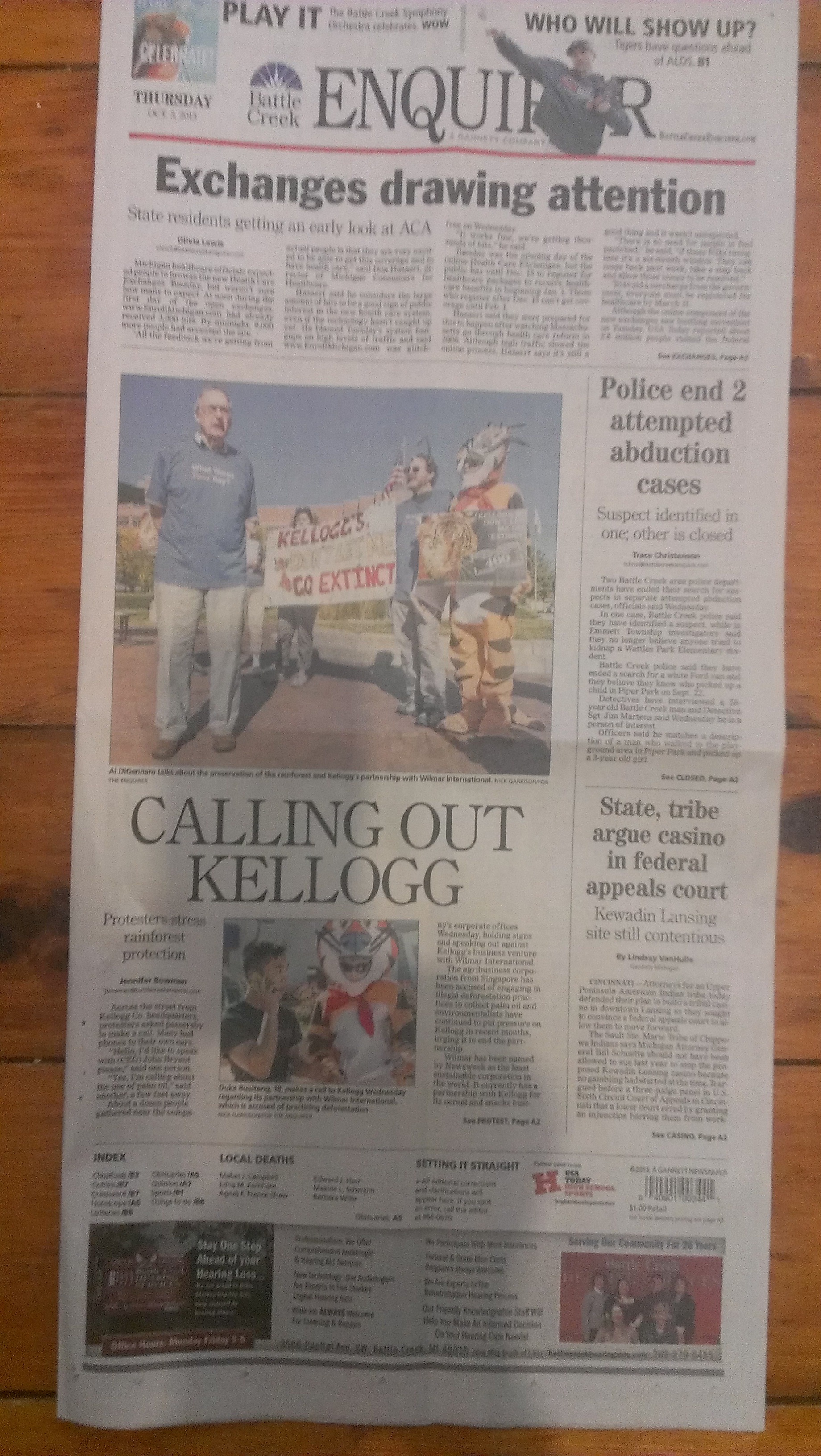 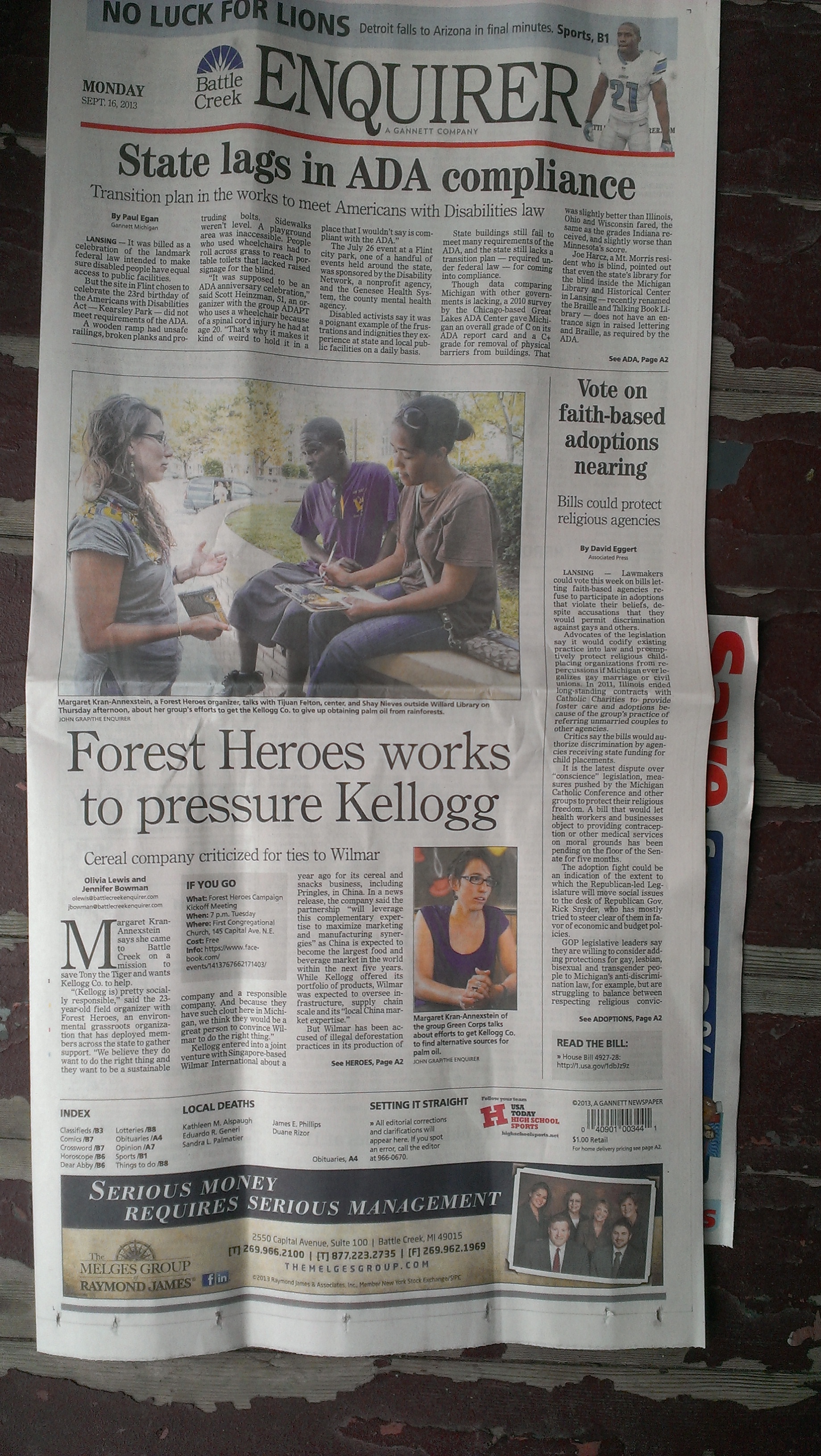 Before the launch of Forest Heroes

Huffington Post: Sustainable Deforestation? Kellogg’s Is on the Hot Seat