Unfortunately, the palm oil supplied by the dozens of subsidiaries and affiliates of IOI is some of the worst and in the world. The plantations operated by IOI and its affiliates — like a company called Bumitama, which itself is one-third owned by IOI — are terribly destructive, laying waste to tropical rainforests, draining and digging up carbon-rich peatlands, ruining the habitats of vulnerable orangutans and critically endangered Sumatran tigers, and exploiting local communities and workers alike.

While much of the industry is transforming at this very moment — with some of the biggest palm oil producers and traders in the world recently committing to deforestation-free, peat-free, and exploitation-free policies — IOI and its affiliates are the worst laggards.

But to really get a sense of how bad the company is, you have to take a look on the ground, at the plantations themselves, where it is crystal clear to the naked eye how diverse rainforest habitats and carbon-rich peatlands are being laid to waste in order to plant palm oil plantations.

Here photographs from friends and partners of Forest Heroes, showing a few different case studies — low-lights, really — of the rampant clearing, deforestation, and destruction conducted by IOI and its subsidiaries in Indonesia. To see even more images, click through to this slideshow on Flickr.

In this plantation, called Bumi Sawit Sejahtera (BSS), jointly operated by IOI and Bumitama, 93% of the land holdings consist of swamp forest – with 1,047 hectares of peatlands, nearly 711 hectares of which are protected under Indonesian law. Though IOI committed to limits on planting in these areas, satellite and on-the-ground photographic evidence from the last six months show ongoing clearing operations.

Bumitama Agri Group’s Ladang Sawit Mas (LSM) Plantation concession was cleared illegally. Harvesting palm on protected land is illegal under Indonesia’s forestry law, but years of vague bureaucratic enforcement have resulted in a deliberately muddled gray area. So the Bumitama operation referred to as LSM includes a concession that overlaps with the protected areas of the Gunung Tarak Protection Forest, Sentap Kancang Production Forest Reserve, and the buffer zone of the Gunung Palang National Park, areas which host one of the world’s largest populations of the Southern Bornean orangutan. Many of the problems with this concession were spotlighted in our Commodity Crimes report.

In March 2013, after LSM invited International Animal Rescue (IAR) to assist with the relocation of orangutans spotted on cleared land, IAR rescued four starving orangutans, including a pregnant adult and a baby.

It is likely that other orangutans, located on the small patches of forest remaining in the plantation, are at risk.

Killing orangutans and other protected wildlife is supposed to be prohibited by Indonesian law, but Bumitama has continued to clear this land–as proven by satellite imagery–even after pledging to stop deforestation while a conservation assessment was conducted.

Karmele Llano Sanchez Executive Director of International Animal Rescue Indonesia Foundation, recounted what they saw:  “We were appalled to see the condition of these rescued orangutans. All of them had gone through long periods of starvation before we rescued them, as the area where they were found, since the company had cleared most of the forest, was too small to provide them with enough food…. [O]ne of the rescued orangutans had lost her baby, probably killed before the rescue team arrived.”

Digging of drainage canal next to natural forest in LSM plantation. Photo courtesy of Jason Taylor/Friends of the Earth

A drainage channel through peatland in the LSM concession. Photo courtesy of Jason Taylor/Friends of the Earth

New land clearing and digging of drainage canal in peatland in LSM concession. Photo courtesy of Jason Taylor/Friends of the Earth

The Karya Makmur Langgeng (KML) concession, operated by Bumitama, is plagued by the same problems of the other IOI affiliate operations. Bulldozers clear the land before even applying for the proper permits. Orangutans habitats are razed. Peatland is drained. Here are some photos.

A line of bulldozers dig and drain the peatlands in the KML concession. Photo credit: Kontak Rakyat Borneo

A handful of trees remain in an area cleared by IOI’s affiliate, Bumitama, on a plantation called KML. Ironically, the sign reads, “Our plantation is a company that is committed to the fulfillment and implementation of the RSPO (Roundtable on Sustainable Palm Oil) principles.” Both IOI and Bumitama are members of the RSPO yet they consistently violate the Roundtable’s standards”: Photo credit: Kontak Rakyat Borneo

If you have the stomach for any more photos, here’s a slideshow from all three IOI-affiliated operations: 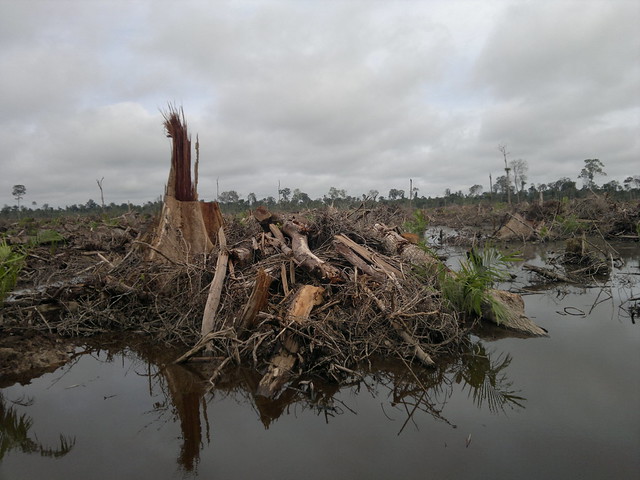